With just 500 units in production, that feeling of wanting what we can’t have only adds to the appeal of the mind-blowing new McLaren Senna.

Paying homage to the Brazilian Formula 1 racing legend Ayrton Senna, who had a record-breaking streak with McLaren F1 before his untimely death in 1994, this carbon fibre hypercar raises eyebrows for a number of reasons - most notably the fact that it is, in fact, a road car.

Let’s start with the basics: the McLaren Senna is the latest in the Ultimate Series range, packing a 4.0 litre twin turbo V8 engine with 789 bhp and a seven-speed twin clutch gearbox.

Quite simply it’s a titan amongst inferior road cars: the McLaren Senna’s top speed peaks at an eye-watering 208mph, quite inappropriate for the school run but a hell of a ride if you’ve got access to a local race track.

Designed by Robert Melville, known for his work with Victoria Beckham on the Range Rover Evoque amongst others, the McLaren Senna is billed as “aggressive” in its design.

In the manufacturer’s literature, marketers call this McLaren supercar “completely different from any previous McLaren” and cite the need for meeting uncompromising performance and acceleration targets.

They refer to the McLaren Senna vs P1, for example, stating in no uncertain terms that “form follows function”.

The vast rear wing features layered slats underneath, giving rise to a low, wide appearance, while the wheels are pushed out into pods on every corner.

This is all to complement the balance between drag and downforce – see below for just how much downforce the aforementioned rear wing can handle.

The moving front aero blades almost resemble a three-element wing, helping to improve the handling on tight corners and give the Senna extra speed where it’s needed most.

McLaren may call it aggressive, but it’s clear that aerodynamics have been the driving force behind every design decision on this car.

To we mere mortals, of course, that simply translates as not the sexiest McLaren we’ve ever seen, but as the design boffins warned, this perhaps unsightly McLaren Senna design is totally outweighed by its flawless performance and jaw-dropping specs.

Ever proving that motorists should not judge a book by its cover, the Senna packs some very impressive car stats, of which some of the most notable include its weight.

Without fluids, it weighs less than 1,200 kg, with strength clearly having been factored in to its design.

Built around a central carbon tub, it features a rear wing weighing in at 4.87kg that can support up to 100 times its own weight.

Well, how else would it achieve breakneck 0-60 times of 2.8 seconds? Rather than focusing solely on power, Melville has stripped away unnecessary weight in every way he can.

Each front wing, for example, weighs just 660g, while the new electrical door mechanisms have reduced the previous mechanical releases by 20 per cent in weight.

Understandably, with 800 metric horsepower and 800Nm of torque, the Senna isn’t the cheapest to run of all the McLaren models.

For starters, the P1 is far more environmentally friendly: the Senna can’t boast a hybrid engine, but it does offer a list of upgrades as long as your arm.

Quite apart from the plethora of wings, slats and holes, it also boasts goodies such as a new camshaft, pistons, intake manifold and an exhaust made from titanium and Inconel.

With all this throttling power and refined, aerodynamic design, the Senna offers a realistic 22.8MPG and 280g/km CO2. But let’s be frank: you’re only going to take it out on the track anyway.

While unlike the McLaren Senna GTR, is it completely road legal, to abstain from track driving this incredibly aerodynamic masterpiece would be tragic.

You might feel slightly out of place taking this on the road, largely thanks to its fierce gripping and braking, which takes its toll on the neck at high speeds.

The Senna’s double wishbone suspension has been designed to focus on track driving: aptly named the RaceActive Chassis Control 2, its adaptive dampers stiffen in Race mode to lower the height and improve handling.

These are connected via the hydraulic system, and this, amongst a whole other wealth of intelligent algorithms, allows the Senna to seamlessly adapt to quick-changing situations and improve performance forthwith.

Despite its aggressive nature, the Senna is very accommodating to the driver, with hugely responsive reactions to even the subtlest of changes you make.

Steering provides wonderful feedback and guides you in exactly the right position, while the chassis adapts accordingly.

Cornering is almost dream-like: the aforementioned dampers have been programmed to react to change within two milliseconds, stabilising the car in time for you to reach the corner.

Rather than relying on springs and anti-roll bars, the Senna’s gas-filled accumulators help to resist rolling completely.

If you’re braking heavily (which it almost demands) the Senna pops the rear wing up to stabilise the car further. A front to rear link also helps to reduce impact stiffness.

Four bespoke Pirelli Trofeo R tyres make it pretty much the quintessential Senna Formula 1 car: these somehow manage to provide a vice-like grip on the road, but they do not compromise speed when cornering.

If you’re driving conservatively and braking on corners, then the Senna offers a convenient progressive oversteer.

At higher speeds, the carbon ceramic brakes and rear wing work in unison to stop, dropping speeds of up to 140mph in under 200 metres.

On the road, you’ll notice a pure, responsive and precise drive. The Senna has a twin-clutch gearbox that can be controlled manually by paddles behind the steering wheel. ‘Inertia Push’ technology in Track and Race mode make for speedy gear shifts, but if you’re in Sport mode on the road, you’ll definitely notice when the gear changes cut the ignition.

Let’s pretend we’re not taking it out on the track and we can squeeze five minutes in to take a look at the McLaren Senna interior.

We’ll start by stepping in – like any futuristic supercar, the Senna features upward-opening doors, but few feel this light, demonstrating once again Melville’s attention to detail in his lightweight design.

While on the interior it’s every bit a racecar – think panoramic views and intuitive control layouts – there’s still a degree of comfort to be enjoyed.

Primarily, the Senna offers carbon shelled seats, which come in two sizes depending on the size of the driver. Moreover, the 8kg seats grip the driver tightly with a harness in the belts, so there’s no danger of unwanted movement while you’re hitting 200mph on the track.

There’s the rather stylish option of a glazed door area to reveal the road surface, which is highly recommended if you want to enhance the thrill of your drive even further.

This is particularly useful when you consider that everything else that could be diverting your attention – i.e. the infotainment system – is located neatly above your head.

The McLaren Track Telemetry app can be combined with the front facing, in-car to front and rear-mounted cameras to record all the necessary data from your laps.

It’s certainly no school run dashcam, but it will record every lap for later analysis, making it a funky boy or girl racer toy.

Interior options that are perhaps more fitting for the school run include the fixed passenger seat and drinks bottle system.

You can also upgrade to a ‘Touring’ specification seat, or for cruising with music, a Bowers and Wilkins hi-fi system.

Is the McLaren Senna car for sale?

At the time of writing, every one of the 500 has been snapped up, and when we consider the McLaren Senna price, this may be a blessing in disguise.

Retailing at a hair-raising £750,000, it’s hardly the kind of city runabout for exclusive use on weekends.

Its track performance, however, more than justifies the asking price. It unabashedly lets you force the pedal up to 175mph without so much as a groan, and its function-forward design makes for a very imposing road presence.

We sincerely hope that every lucky owner of the Senna is using it to do just what it was made for – tear its way around the tracks.

It’s only fitting that a car named after an F1 driver should feel like it needs to be driven by a professional.

Though it’s responsive and accommodating, its clinical design also begs for real petrolheads to take the wheel. And if there is anybody out there silly enough to take it out on the road, let’s hope McLaren decide to release a few more for the rest of us. 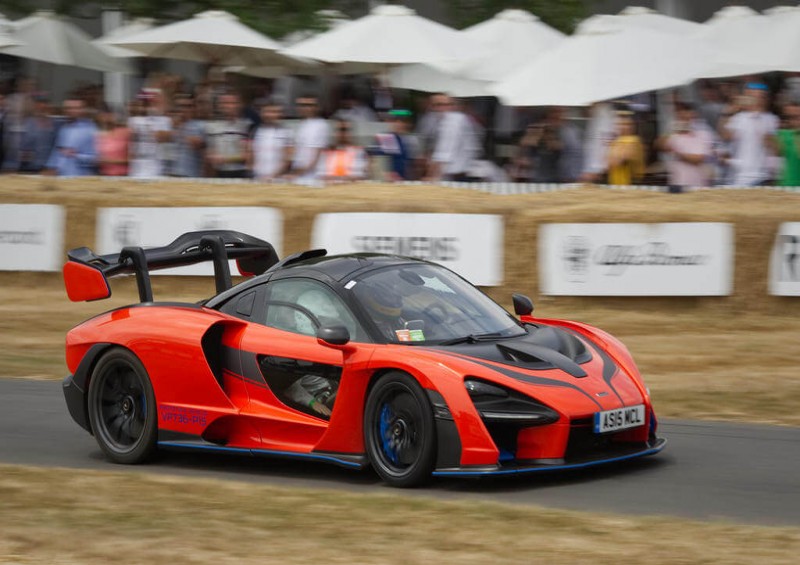