Launched in May 2018, the Citroën DS7 Crossback joins a long line of premium crossover SUVs hitting roads in the same year, with worthy competitors in the form of the Jaguar E-Pace or the Volvo XC40.

This one comes at a slightly higher price than the latterly mentioned crossovers, and in the short time since its release, it’s safe to say it has divided opinion.

Citroën is a brand we’d more likely associate with family-friendly people carriers juxtaposed with quirky compact cars and yet, in 2009, they decided to branch out into something a little more luxury with the launch of the DS Automobiles range.

Touted as “Distinctive Series” or indeed, “Different Spirit”, the premium sub-brand offers a selection of luxury saloons and sportier models.

The latest release, the DS7 Crossback, is as far removed from the Citroën stereotype as we can get – which is probably explained by the fact they decided to part ways in 2015.

This SUV, then, is the newest development since Citroen decided to discontinue its European production with DS.

What is the DS7 Crossback?

Though not the first SUV from the Distinctive Series range, the DS7 Crossback UK is the first of its kind in Europe.

The vehicle has been described as “avant garde” in its marketing material, with a choice of four engines, an active suspension system and even night vision, all neatly brought together in a large SUV package.

Said engines include the Pure-tech 1.6 litre turbocharged petrol engine with 222 BHP, as well as a 178 BHP version.

The trim range starts with the Elegance model, the only model in the pack which cannot be upgraded to the 222 BHP option, moving up the line to the Performance Line Model and the Ultra Prestige test car. 1.5 litre and 2 litre diesel engines are available, and in 2019, expect an environmentally-friendly plug in version, which promises up to a 30-mile electric range.

Though it’s got its fair share of rivals – including the abovementioned as well as the Audi Q5, BMW X3, Mercedes-Benz GLC and Mazda CX-5 to boot, there are some innovative features which are entirely unique to the DS7.

The night vision feature is exclusive to the DS7, while its headlamps also rotate, almost as if they are addressing their master, when the car is unlocked.

In the Prestige trim, there’s a whole goody bag full of technical features, including front parking sensors, wireless phone charging (for the kids, of course), a reverse camera, and seats which are steeped in comfort.

They are electronically adjustable, ventilated and even offer a massage function – something quite rare for vehicles across all models.

How does the DS7 look?

Upon first glance at the exterior, it’s not entirely dissimilar to the Audi Q7, though its marketers are keen to emphasise its uniqueness, specifically by referring to its trademark “DS Wings”.

DS claim that its “sculpted shapes and intricate aesthetics emphasise its dynamism”. Indeed, they may help for a comfortable drive, but it’s hard not to make the obvious comparison.

If you’re an arty type, you’ll be pleased to see it comes with an array of eye-catching colours, which have been just as artily named: you can try on the “Absolute Red”, “Byzantin Gold”, “Ink Blue”, “Pearl White”, “Perla Nera Black”, “Andradite Brown”, “Platinum Grey”, “Cumulus Grey” or the “Polar White” for size.

With its upgradable alloy wheels and domineering front grille, it certainly does live up to the “designed like a piece of jewellery” description – and that’s just on the outside.

For the interior trim, which is pretty impressive either way, we have a choice of two upholstery options: the nappa leather or the Alcantara trim, depending on the trim level.

The 12 inch widescreen colour infotainment system looks as attractive as (and similar to) some of its German rivals, but not all models will be afforded the same classy design.

Entry level models, for example, will not have the same attractive features, plus the infotainment system in these pales in comparison at a weeny 8 inches.

These screens replace the analogue dials we may see in competitor vehicles, which could be a blessing or a curse.

LED lighting is available across the whole range, but if you want the benefits of a panoramic sunroof and “crystal”-like controls, you won’t find it in a cheap DS – go for the Prestige.

This is certainly one area that has divided opinion in the DS7 – some have praised its high quality colour display, while others feel it doesn’t match the rest of the “luxury” interior.

When we tried it, we noted that there wasn’t a huge difference in terms of visibility between the 8 inch and the 12 inch screens, so if you are going for an entry level model, this won’t be an issue.

What will be an issue, however, is the relative confusion of the whole process. Almost everything you need to control settings, such as climate control or the optional satellite navigation system (depending on the model) is controlled by the cursed touchscreen.

This is of course a distraction from the road, more so in the smaller screens, and said shortcuts do not light up when the car is off.

None of these problems are the end of the world however, and the infotainment system does have some good points.

For example, there’s the Audi Virtual Cockpit system, and the ability to connect with Apple or Android features – something which a few of its competitors lack.

To its credit, the DS7 offers a plethora of drive assist features. But are they more style than substance? A little, yes – the lane-keeping assist really has no leeway for even the slightest drift within the lane, while the cruise control may sound smart as an “adaptive” feature, but this simply means you cannot adjust your cruising speed for speed limits.

But again, let us focus on the positive – Comfort mode is what you want if you’re looking for an all-round smooth drive.

There’s no shunting on acceleration, and though it takes a while to get going, it does maintain a sense of quiet. Make sure you stick to below 4000 revs to keep it that way.

It offers 221lb of torque, while the gear changes on the eight-speed automatic transmission are peaceful for the most part, but keep an eye out for lower speeds.

Of course, like many of its competitors, there is the more fun option of the steering wheel paddles, even if you only use these for engine braking.

Handling is very reasonable, even at high speeds, with a confident grip on the road. Comfort mode automatically adjusts the dampers, using very impressive technology to take a camera view of the road and adjust the suspension accordingly.

From every angle, it’s easy to tell that the selling point of this vehicle is its tech rather than its propensity for power, but that suits us just fine.

You’ll find the DS7 Crossback for sale now, and with a combined fuel economy of 48 to 72 MPG, you could be forgiven for not waiting until next year when the plug-in hybrid becomes available.

With the Jaguar E-Pace offering a combined MPG of 33-53, while the Volvo XC40 comes up short at just 40-59 MPG, there is certainly appeal for its ownership.

Alternatively, the current going rate for a DS7 Crossback lease is £232.99 and up, which of course is for the entry level model, but may be a slightly wallet-friendlier option than the eye-watering upfront cost of the Ultra Prestige trims.

An added bonus is the DS7 Crossback Motability Scheme: the company prides itself on its participation in the scheme, which means it decks out any DS vehicle with features for disabled drivers.

Those who sign up to the scheme with DS Automobiles will also benefit from insurance, servicing, maintenance, breakdown assistance and new tyres or a windscreen replacement.

Of course, the beleaguered Citroen may suffer from its reputation as a poor provider of on-board equipment (as do many French brands) but the DS7 has not yet suffered any such claims.

This may be down to their parting with Citroen, or it could just be engineering genius – but either way, it’s reassuring when it does come down to thinking about breakdown cover.

The DS7 Crossback is one that’s going to appeal to the technophiles rather than the petrolheads. It’s not to say that DS haven’t given us anything new, but certainly a lot less than what they promise in marketing material.

Some features are gimmicky, others more practical, but overall it delivers a smooth drive that’s certainly an economical choice for long journeys or family trips.

You might not raise any eyebrows, but you won’t take any risks either. 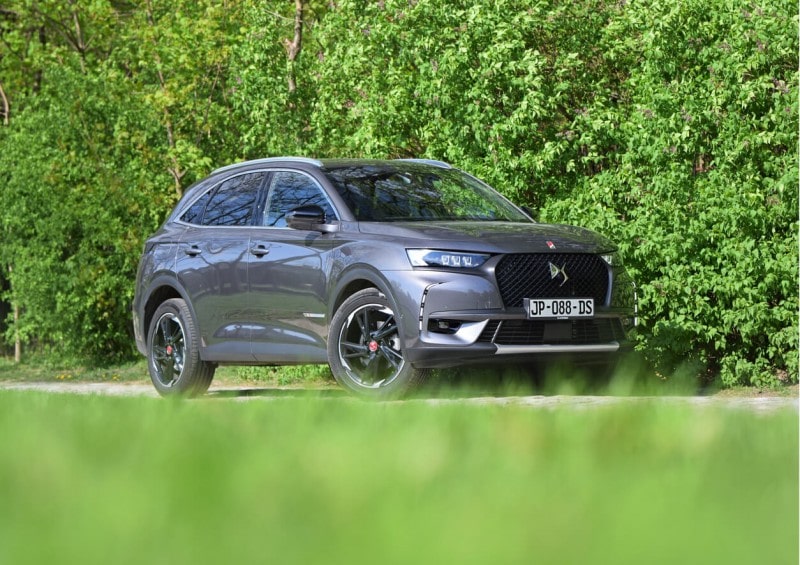