The Hyundai Elantra Touring was reviewed last year as a car recommended for those who like a fun drive out of a simply designed car with good driver vision and solid construction.

At the time, the replacement was already nudging its way out of the factory and questions hovered regarding the newer car’s likelihood to retain the uncommon strengths of the ET.

That year-long wait is now done and there’s no doubt that the 2013 Elantra GT performs well enough to rank above other new compact Hyundais – but can it hold a torch to the solid capabilities of its predecessor?

Looking at the styling, there’s little doubt that the Elantra Touring was not really designed to turn heads. It’s possible to describe the ET as subtle and clean, but it’s clever vocabulary for a body which is less charitably expressed as nothing more than plain and generic.

The new Elantra GT immediately shuns such terms, which brings Hyundai’s newer design language to the compact hatch group. It has the extra-large hexagonal grille, headlights that stretch to meet the aggressively raked A-pillars, and undulating sides of its recent stablemates. The new car is going to be noticed by passers-by – many of whom will consider it attractive, though fans of the older model may just consider the changes a little overdone.

Once we climb inside the car, we can see that there’s a more stylised feel here too, with a piano-black faceplate on the centre stack and silver plastic throughout – still, it’s restrained when put alongside the Elantra sedan.

The controls aren’t quite as accessible or simple here, but the advancements in technology and infotainment in the intervening time are to blame and that’s no bad thing – especially as this now includes Hyundai’s new Blue Link telematics system.

With the driver’s seat, they have pleasingly kept the level of comfort that the Elantra Touring offered, but with the body changes, much has been lost in terms of immediate visual space. Gone are the large side windows, relatively upright windshield and compact instrument panel. Not that any of this is any worse than the standard for the class, but it’s a loss when compared to the older model which was a throwback to the days when compact hatches were easy to see out of. Now, there seems to be a tendency to put a little too much car between the driver and the road.

Looking through the rear is unimpressive, but if you opt for the additions of the top-end package, and you get a rather nifty rearview camera which is concealed under the badge on the hatch providing an extra level of visibility.

Much of the range’s design owes considerably to the European market’s i30. Offered in two lengths across the Atlantic – a hatch and an estate (Queen’s English for ‘wagon’) – here we are treated to just one. For the Elantra Touring that was the longer estate car, but with the GT there’s a loss of length as the blueprint matches that of the i30 hatch. This can be blamed on the American buyer, who simply didn’t take to the ET enough to warrant a return of the large shape.

Consequently, the combined legroom between the vehicles has shrunk by over three inches and cargo volume drops to 51 cubic feet over the previous 65. There remains adequate room in the back with a decent height off the floor for the rear seats providing more comfort than most cars, but there’s not as much room for adults to stretch as there once was. The cargo volume remains competitive against other hatches but the car no longer has the space to compete against compact crossovers.

Under the hood, the Elantra Touring had a 138-horsepower 2.0 litre four-cylinder engine that wasn’t winning any straight line competitions but delivered sufficient midrange power through its five-speed manual transmission to comfortably take on day-to-day driving.

With the GT, we get ten more peak horsepower charged with moving two hundred fewer pounds (2,745 here, vs. 2,937 from the older ET) but despite that, the 1.8 litre port-injected engine feels lacking. In tests, flooring the accelerator is all but unnoticeable and there’s no oomph to impress.

Both the automatic and manual transmission versions have been upgraded to six gears which improves fuel economy considerably with the stick shift – up from a meagre 23/31 to a far more competitive 27/39. When all put together, the engine and gearbox (plus removal of the ET’s B&M supplied short-throw shifter) add up to a workable package, but there’s no real joy gained from choosing the manual Elantra GT.

Thankfully, the CEO of Hyundai USA, John Krafcik has promised that a future engine upgrade is coming. He hinted that there would be no turbo and no 2.4, which leads to speculation of the 165-horsepower 2.0 litre four that’s currently available in the Tucson and Kia Soul. It’s not an engine that anyone is drooling over, but far more desirable than the 1.8 which doesn’t even remotely deliver on the promise that the GT stamp dangles.

The handling on the Elantra sedan is so vague and the ride so busy that it’s impossible to determine what Hyundai’s chassis engineers were working to optimise – by comparison, the older ET had Euro-tuned suspension and performed in a much more athletic fashion for a more composed ride. This coupled with the firm and well-weighted steering to make for an entertaining drive.

With the Elantra GT, the Sachs-supplied dampers are similarly better turned than the manufacturer’s standard offerings and technically the new car should handle better despite the independent rear suspension having been replace with a torsion beam. In reality, however, there’s less of a connection felt with the steering and even the ‘sport’ setting doesn’t deliver a firm drive, though it’s a marked improvement over the other two settings!

Price-wise, the Hyundai’s are consistently cheaper than the competition, even if this no longer translates to being downright cheap. The Elantra GT starts at $19,170 and can be improved by opting for the Style Package that adds 17-inch wheels, an impressive panoramic sunroof, 10-way power driver seat and heated perforated leather – for an extra $2,750. Plump for the Tech Package at $2,350 and add sat nav, rearview camera and automatic climate control. By comparison, the Elantra GT with Style Pack comes in at $1,650 more than the older Elantra Touring, but once you take into account the new car’s standard additional features (infotech, larger sunroof, power driver seat) and you see a near $400 advantage in the GT’s favour.

Move outside of Hyundai’s range, and a comparison with a Ford Focus SE that’s similarly equipped is approximately $1,300 more than the GT with Style Package – adjust that with the remaining feature differences and the Hyundai’s price advantage doubles. Similarly, a Mazda 3 Grand Touring comes in around $2,000 more expensive than the Hyundai.

There’s no doubt that from the outside, the Elantra GT is far more stylish than it’s older sibling, and there’s a whole host of additional features and technological upgrades. But for all the additional show, there’s less go.

The steering and shifter feel less direct in the driving tests though the suspension remains well tuned, and the driving position offers a little less confidence. Plus there’s the loss of rear legroom and cargo room due to the switch of body shape. To conclude, the new car is better looking and better equipped but less fun to drive and less practical (although it does boast considerably superior fuel economy). If you are after looks, the new car comes out on top, though driving experience falls in favour of the old.

The Elantra Touring sold poorly though, so Hyundai hedging its bets by joining the crowd is not unexpected. There’s more potential for this car to attract buyers even though it enters an arena of greater competition for them. As it stands, the Elantra GT doesn’t drive as well as the Ford Focus, and certainly not the somewhat ugly Mazda 3, but once the engine upgrade makes it truly deserving of that GT badge that gap is going to be a lot narrower. As it stands, you get a lot for the price and it does what it does fairly well. 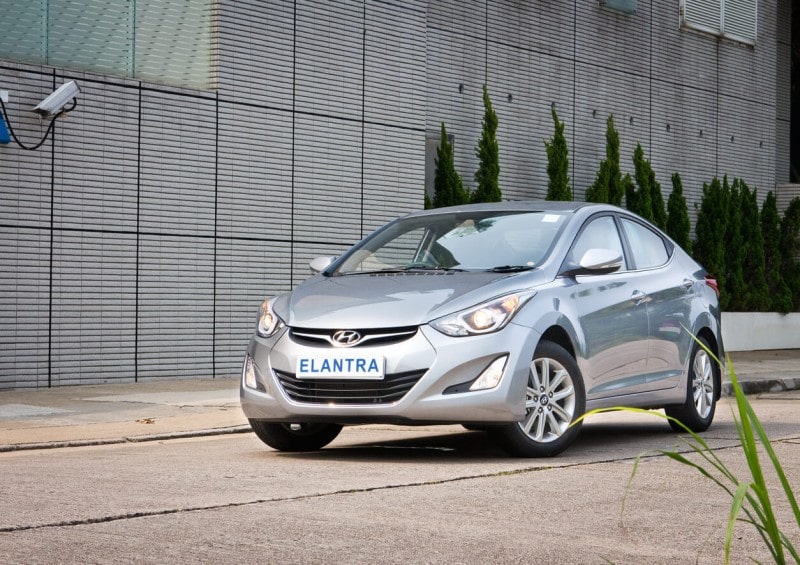